If such gatherings are allowed by then, my first author event is scheduled for Friday, October 9, 7:00 PM, at Village Books, Bellingham, WA. I will show photos I took in 1973 while a Peace Corps trainee in Afghanistan, speak about and perhaps read from the novel, and sign copies of The Kabul Conscript and Cape Decision.

In the meantime the The Kabul Conscript and Cape Decision are available from your favorite indie bookstore, and amazon, etc. Signed copies are available by using  the order form at bottom of this page. My publisher, Village Books, will mail anywhere in the USA for 99 cents, or if you live near Bellingham, you can pick it up at Village Books.

The Kabul Conscript was published February 26, 2020. Another in the “Conrad Slocum” series, it’s a prequel to my novel, Cape Decision, published a year earlier. The story takes place in Kabul, Afghanistan during the summer of 1973, almost thirty years earlier than Cape Decision.

The Kabul Conscript is a suspenseful tale of friendship, intrigue, and deception. Although the novel is entirely a work of fiction, I was a Peace Corps trainee in Kabul during the summer of 1973. Readers of Cape Decision will learn how Conrad, David, and Karen met in the heady days of  the General Daoud coup.

David Stuckrath, a Peace Corps Volunteer stationed in Kabul, Afghanistan, becomes involved in a dangerous adventure with other young Americans, Afghan friends, and the enigmatic intelligence agent Conrad Slocum, during the days leading up to the coup d’état by General Daoud in the summer of 1973.

Kabul in the 1970s is a remarkable combination of the traditional and modern. The busy bazaars are liberally salted with youthful hippie trekkers, adventurers, spies of a dozen nations, and the emerging communist and fundamentalist devotees. David is among the group of Peace Corps Volunteers who befriend the AWOL navy seaman, Brian Peccanter, and his alluring girlfriend, Karen Truman. Seaman Peccanter has been falsely accused of treason, and is being pursued by Captain Ramsy, who has enlisted the help of his close friend, the formidable intelligence agent, Paul Sherman. A young expatriate, Conrad Slocum, augments his income by occasionally supplying useful information to the same intelligence agency Paul Sherman labors for. Conrad too befriends the young couple, but must hide his actions and sympathies from Paul, who wants to recruit him to full-fledged agent status. As events unfold, the Afghan government is overthrown, and the young friends are faced with the plight of the pregnant Reshtina, a Pashtun language teacher trying to escape the horror of a forced marriage to a violent fiancé.

Bookstore & wholesale orders available from Ingram, or directly from the author. 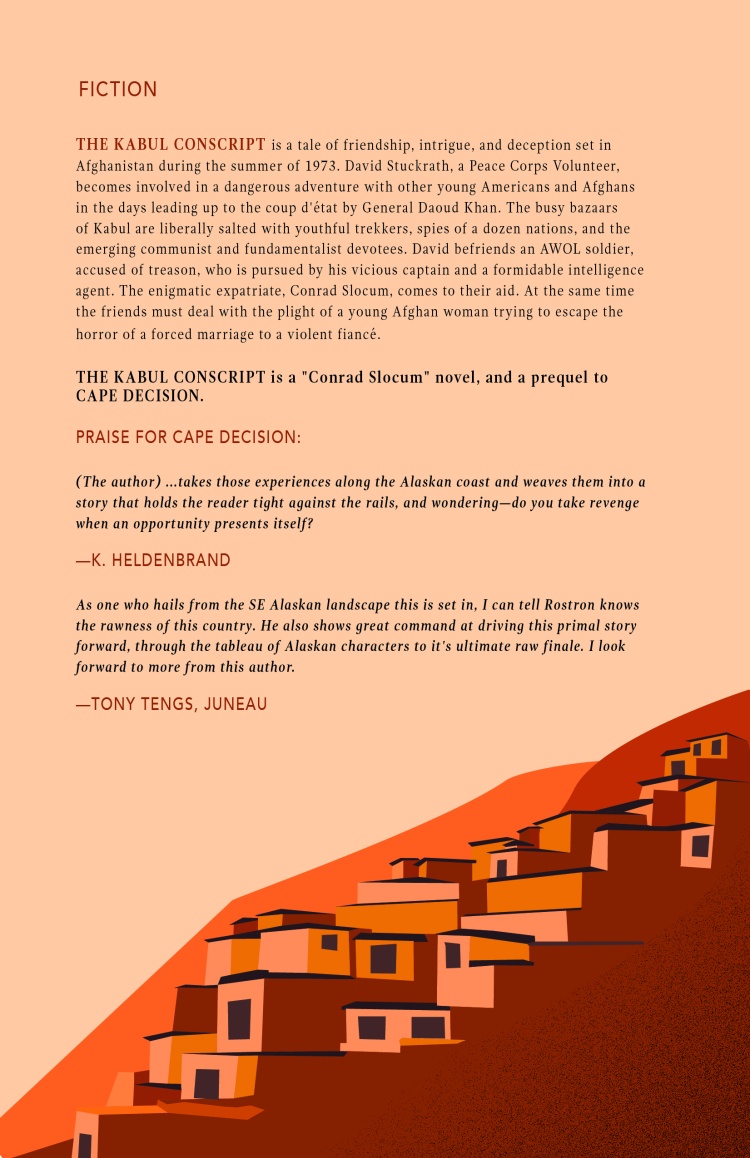 One thought on “Novel: The Kabul Conscript”